When you walk down the narrow strip of road dividing the beach in Agonda, Goa from the inland, there are various signs crudely affixed to posts and sides of shops advertising cooking classes. Sometimes there are detailed directions, email addresses and telephone numbers. Others, however, merely have an arrow. This was the one I followed, down an alley beside a wine shop. It led me to a simple house where a couple of Indian ladies were sitting outside. Seeing me one of them shouted something and shortly a sari-clad lady appeared who would turn out to be my teacher for the following evening; her name was Shami.

It was what I’d been looking for. Home-style Indian cookery with no frills. Something I could replicate at home, but also a different type of culinary challenge. The big takeaway I’ve got so far from my mostly plant-based diet has, not, as I’d perhaps feared, been its limitations but rather a horizon as wide and glorious as the one I could see from my beach hut. My cupboards and fridge are filled with a lot of new – to me – and exciting ingredients that a year ago I would never dreamed of having at home. I plan a separate post on that in the near future.

Meanwhile I showed up at 5 o’clock (‘any later the mosquitoes come’ she’d warned me) and met my cooking companions, a young Swiss couple who were travelling around Asia. Shami was assisted by her brother, Rafiq. We were to make several dishes: masala chai, aubergine masala, an okra side, cheese and garlic naan breads, coconut chutney, aloo gobi and of course Goan fish curry. It panned out that chef Shami did most of the cooking while we helped with the preparation,  the chopping and dicing, the rolling and some stirring. At the same time I made scribbled notes and took photos.

Labour-intensive yes, but very satisfying in that respect. I’m very fond of cooking that requires a lot of prior prep so that when the cooking is underway everything is ready to be added. I was fascinated by the cooking implements: the flat-iron tawa used to cook the naans, the rolling pin and raised board, the little contraption Shami sat on – a wooden block with a projecting serrated blade – which doubled as a fish slicer and coconut flesh extractor. I liked the way everything was designed especially for this type of cookery. It was a real slice of Goan home life, the kitchen half inside half outside. 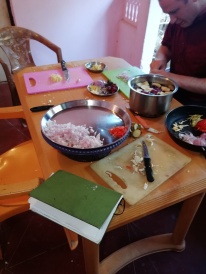 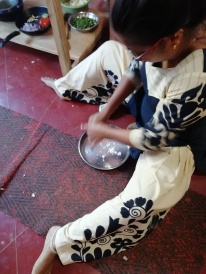 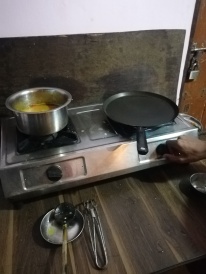 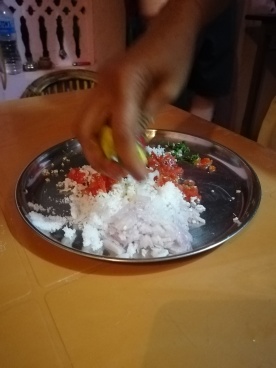 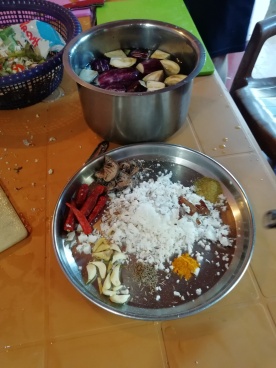 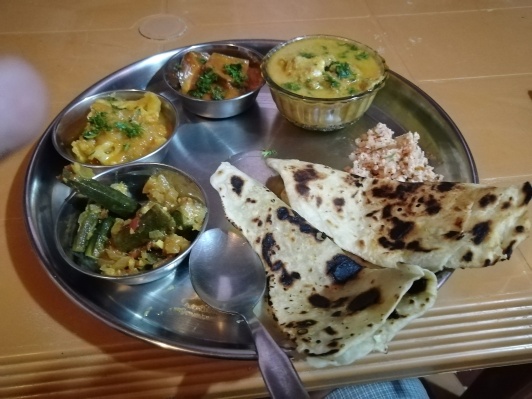 Back in Beijing I tried to recreate some of that southern Indian flavour in my own kitchen. The sun came out although the view across the road was not Agonda beach with the Arabian sea rolling in and cows lolling about the sand but rather a grubby and grey six-floor building used in part as a delivery depot. What I did have that was authentic were the correct ingredients. I’d spent time in a Mumbai market being gently ripped off by several storekeepers but what I brought back – garam masala, black mustard seeds, cardamom pods and, most excitingly, fresh tamarind – was still cheaper than anything I could have bought here, even if I had found it.

In all truthfulness my efforts were not so successful largely because, like a child with a new toy, I was rather over-eager with the tamarind and put in more than I should have to both dishes. It is a delicious ingredient but has a tendency to overpower. Lesson learnt. Still, I can testify to the tastiness of the food as I was there and will always remember how it was, there, in Shami’s inside-outside kitchen next to the beach in Agonda, Goa.

I took the fish out of the curry and used cooked squash instead.

Blend the first eight ingredients with a cup of water until you get a smooth paste. Stick blender worked best for me. In a pan heat the oil then add the onion. Interestingly, I was taught to put the salt in next as it both takes the moisture from the onion and cooks it quicker. It works. When the onion is softened add the tomato, cook for a minute or so then dole in the spice paste, using water to make sure all the sauce is recovered. Bring to the boil then add your protein or vegetables and cook away on a medium heat for ten minutes until ready. This is a mellow, soothing curry although up the chilli ratio if you want a spicier hit.

Blend everything apart from the aubergine, tomato, salt and onion until you get a smooth paste. Chop the aubergine into large chunks and soak in water. Heat sunflower oil in a pan then add onion, salt and tomato as per the recipe above. After softening put in the aubergine, drained, then half a cup of water and cover. Cook until everything has amalgamated and the aubergine has lost its toughness. Spoon in the spice blend and a bit more water if necessary. Bring everything to a bubble. The result should be tangy, sweet and sour, deep with different flavours.

In a large bowl and with floury hands mix the flour, salt and oil together with cold water until a dough forms. Then add the cheese and garlic. Rest the dough in the bowl for at least ten minutes, or even longer. Divide the dough into balls about the size of large marbles.

When ready to eat, heat a flat-bottomed pan on a high heat. I bought my own tawa but anything like your favourite pancake pan will do here. On a clean and dry dough-dusted surface roll out each marble into a flat circle, not too thinly. Fold each circle in half and then again so you get a pocket shape. Re-flour then roll out into a flat triangle. Dot the hot pan with melted butter or ghee (no point messing around here) and gently lower in the raw naan. Press down on it while cooking and brush the other side with more butter. Flip over and add more butter. Whole cooking time should not be more than about thirty seconds and both sides of the bread should be slightly puffed and golden brown. 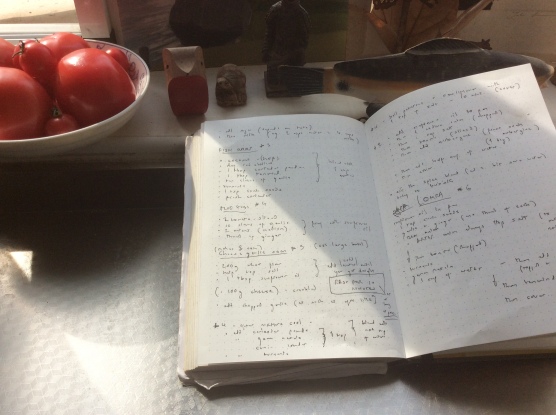 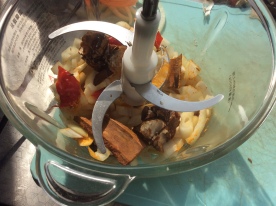