Today was a good example of how I go about things, kitchen-wise. A dollop of kitchen wisdom. How do I explain? It starts from when I wake up, or maybe even the day before, and I have a….taste…is too strong a word…an image, or, rather, a feeling….or, actually, it’s a combination of all these senses. Anyway, I know what it is I want to cook and eat and the idea possesses me to the extent I can think of virtually nothing else until the process is underway.

I sat down earlier to try and write. I wrote a bit. Then I got up and ironed some shirts, listening to The Wedding Present. I already had the notion of what lunch would involve, and yet, I needed a few things for the picture to be complete. Namely, some fresh coriander and some kind of greens. Bitterly cold outside but clear fresh air. There’s a large supermarket about fifteen minutes walk away which stocks a number of things I use regularly which otherwise might be difficult to obtain, like De Cecco pasta and properly sour yoghurt (A pot of which I threw into the basket, being unable to locate any coconut milk – the apron-wearing aisle monitor lady directed me to coconut water instead, although that might well have been because of my parlous grasp of the language).

Again, it’s one of those one-pot dishes I love. The kind of thing that needs equal amounts of adding, simmering and monitoring. This time it was a case of using up things almost festering away in the nebulous area of the fridge bottom. Where things get forgotten and rot. The half sweet potato I had intended to star had to be relegated to the role of something like a third-choice seamer, something to bolster rather than shine. Anyway I had celery as well, plus some oldish broccoli, courgette, carrot and a cupboard full of spices. 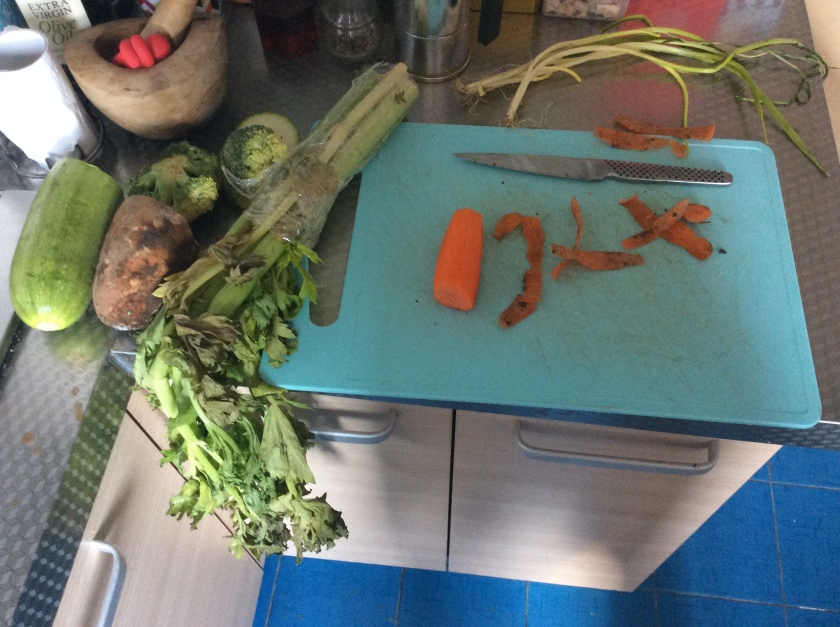 I kept the veg chunky and threw things in as they were ready. With those browning away, I tossed in crushed coriander and cumin seeds and grated in a knob of ginger. Then added spices – smoked paprika, garam masala, medium curry powder, turmeric. Again, I don’t go for exact quantities, although that turmeric needs a careful hand. Chick peas were the final addition. Water with a crumble of stock cube, bring to the boil and let the thing simmer away. I had some spinach, coriander, lemon, tomato and yoghurt on hand to finish the dish. I reckoned half an hour.

I was more or less right. Thankfully the curry hadn’t boiled down to an indeterminate mush, as can happen, and the additions of the aforementioned handy stand-bys at the end – the spinach rinsed and chopped, tomato and coriander the same, lemon squeezed and yoghurt folded in –  actually elevated what might have been sort of dull, worthy fare into a light, citrus-heightened, fresh-tasting meal with a deep and piquant undertone. Rather like a sprinkling guitar line over a punchy bass and drum bottom.

A success, and also my second vegetarian meal in a row. I’m not a vegetarian but I do think at least a few meals a week without meat can only be a good thing, for many reasons. This, actually, is part of the overall motive for this blog, to be more aware of the food I’m eating. I’m aware I have DONE A GOOD THING here, and, moreover, the meal was delicious. Enough, again, for a second – generous – helping.