One of the key things I’ve learnt about getting creative in the kitchen is that the process of making starts with what is absent. If I had a large, fully equipped kitchen and a well-stocked larder at my disposal I daresay I would never have started this blog.

Limited preparation space and minimal cooking facilities. The unavailability of many familiar ingredients. The effort it takes to source a fresh bunch of thyme. Into this mix I am now stirring the challenge to cut out as many carbohydrates as possible from my diet. It’s a weight-loss thing. I figured on this with a combination of regular exercise and less alcohol.

At least two of those are going pretty well. Where I have to get creative is to think of alternatives to the usual sauce-moppers and solid textures. No longer will my fall-back be a rustling portion of fried potatoes, glistening with salt. Same goes for that lunchtime convenience of two thick slices of bread filled with whatever I can fashion from the fridge contents. No takeaway pizza. Rice and noodles are also out, which excludes me from about eighty percent of the dishes in this country. I’m making an exception, as a once-weekly treat, of pasta, although I haven’t been as tempted as I thought I would be.

An inspiration which crept on at me one morning at work and which possessed me for the rest of the day until I could not wait to get on with it. It provided the base for slices of medium-rare sirloin and kale.

It was the soothing prospect of this which had me salivating. The vinegar provided a nice sour note, cutting through the richness, although I guess white wine would have done too. I added the chopped onion to a hot pan lubricated with a little oil and then after a few minutes, added the thyme and mustard. Vinegar sloshed in next with the heat turned up to let it boil. Back on the simmer I poured in the beans, well-drained to get rid of that cat-food tin smell. The stock covered the beans and basically I let it bubble away for about fifteen minutes while the rest of the meal was prepared. Near the end the addition of the cream and another couple of minutes’ cooking thickened the dish deliciously. I could probably just be happy with a bowl of this some other time.

A good late-season warmer. At least a hand-held blender is necessary for the final emulsification.  I eventually made enough for about five separate servings.

There might have been some other ingredients, but this was essentially it. Always starts with the onion frying in oil until soft. I threw in the spices and chilli fairly early on in the process. Then the lentils and squash were introduced and allowed to take on all the pan flavours. The spinach was wonderfully cold when I washed it under the tap. In it went. Then the stock, up to the boil, cook till everything was soft and in with the cream and, after a bit of amalgamation, the B L E N D. This was my lunch out of a thermos for the next three days.

Not meant to stand alone this one although I daresay it could. In this case it was the base for a couple of pollack fillets which originally I’d planned to cook separately but in the end just bunged in with everything else. This recipe is the bastard child of an Aldo Zilli creation. The appropriation is, as ever, my own.

Pretty sure Zilli uses sun-dried tomatoes in his dish. I compensated for the lack of those with the capers – the piquancy is needed in some way. The process remains the same. Onion and carrot, spice, chick peas, capers, stock, coriander, in that order. Cooked until most of the stock reduced to a thin flavoursome gravy. Particularly delicious contrast between the nutty pulses, still with a bite, the sweetened onion and carrot and the hint of spice.

No pictures for this post. How could I visually recreate the sensation of my splayed palm over the pan as it heats, or the squeak the spinach makes when the knife slices through it? How to replicate the rattle of pulses in the colander or the magical mingling of spices in the air? What photo can do justice to the longing I had for a dish of beans or the impatience over a pan of nearly-boiling water? 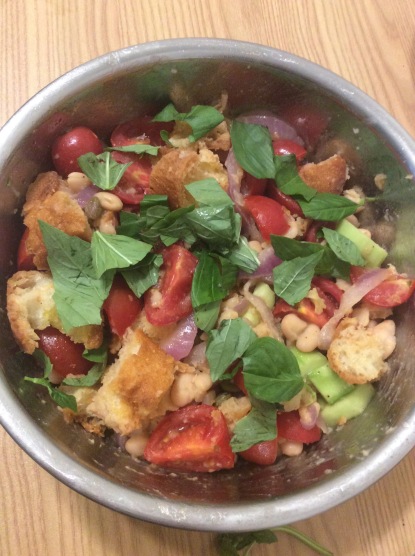 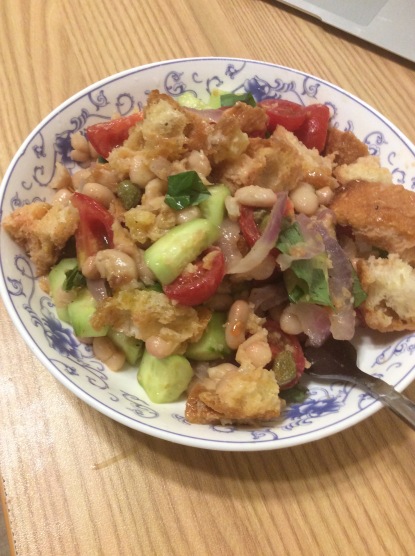 What have I gone and done? Even after proselytising just the other day about the necessity for sticking to the script when it comes to certain dishes I am now guilty of messing things up, of free-associating, of going all stream-of-consciousness – on a salad, of all things.

It’s not just a salad either. Gloria wouldn’t like me calling it that, neither would she appreciate it if I left out cucumber from the recipe, despite my naive incredulity at its traditional presence as a key ingredient. I’m talking about panzanella, of course – the keen-eyed of you will have noticed the pictorial clues –  although given my experimentation I’m tempted to rename it as ‘canzanella’ for reasons which will become apparent.

Sitting at work I was, where I am wont to mull over the food preparation for the evening, a multi-stranded thought process encompassing the presence or otherwise of required ingredients in my store cupboard (singular), following that the detail of where I can purchase those items which, as I scan, are absent from my shelves. That detail involves a mental geographical assimilation of the city: the likely routes I am to take, which means of transport will be most favourable in each case, whether I go home first, how far I can totter on an overloaded bicycle, why there isn’t a magic shop very near to where I live where all the things I need are always available.

But half the fun is finding everything. I like a mini-adventure, a quest if you will. I knew that at home I had half a stale ciabatta, I want to say loafing about, getting staler. But I wasn’t sure if it had got to the point where even a douse of red-wine vinegar and oil wouldn’t revive it. That’s when, mid-afternoon, the clock ticking, I decided to augment the ‘salad’ with beans. Yes. Cannellini, borlotti. That kind.

The route home was made, as ever, by way of Twin’s where I was able to get the aforementioned vinegar as well as sundry other items. But then, arriving home, I realised I had no red onions and so a visit to the unfriendly greengrocer’s had to be made. The woman grunted at me as usual and by now our conversation exists entirely of my nervous half-smile and her throaty non-committance. I know my onions here, that’s for sure.

The bread was salvageable and, indeed, ideal. I soused it and left it to soak, before halving tomatoes, letting them macerate with salt, pepper and oil. I love the word macerate, it seems so violent-sounding for what is in fact an exercise in softening. A mix of lacerate and massacre. Meanwhile I cooked the beans – the horror, the horror – having decided that I wanted a more substantial dish than the original version affords. These I cooked gently with the onion so the flavours combined. Everything else could just be jumbled in together: the cucumber – yes – skinned and chopped, capers, torn basil leaves, all combined with the bread and tomatoes, both oozing delectable juices. I left the beans to cool before chucking those in too. In the end they didn’t really add anything except a little more bulk.

Probably the jury’s out on canzanella. Typing the word into a popular search engine reveals its popularity as a surname. There is also a B&B in Naples named so – the city I can vouch for, the establishment not – which makes me think that I haven’t just coined a word but merely appropriated it from some other context. Possible derivation from ‘canzone’ which means song, and so I get an image, ludicrously, of the old stereotypes of the moustachioed mandolin player at the window of some local Lollobrigida, the cicadas humming in the olive groves and everybody blissfully uncaring of economic meltdown, social deprivation and political corruption. Eppur si muove.