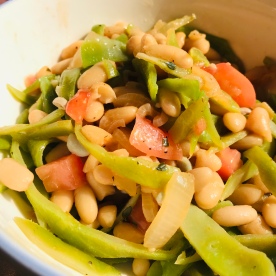 Recently returned from a trip back to the UK where there was only one concern for serious-minded people: what to do with the glut of garden runner beans?

My mother’s vegetable garden has been in runner terms the gift that keeps on giving. However many times my father goes down to water the plants he returns with an armful of long, green, rough-skinned beans. My parents have had them as a side dish for pretty much everything they’ve eaten for the last month. And they work very well, with just a minimum of additions: a little salt and pepper, a glug of olive oil perhaps or knob of butter. There’s something deliciously moreish about them, something to do with the slightly yielding bite in the mouth and slippery finish.

I smuggled a bundle in my luggage back to China. Not that they don’t have them here, or at least a variety. Unfortunately the selections in the greengrocer’s always tend to be on the pale and dry side, and unappealing for that. While on the plane, between sleep, dreams and the films on the small screen, I concocted recipes, imagined cooking in the kitchen.

What goes better with beans than other beans? Italian soups like minestrone are good examples of bean pairings and the idea of different genera together in varying shapes and sizes tickled my tastebuds as I tried in vain to get some sleep in the darkened cabin. In this case it would be Phaseolus coccineus paired with Phaseolus vulgaris, that’s runners and cannellini. A kind of warm slightly stewed salad-y dish.

First cook the runners by placing them in a largeish pan of salted boiling water. They’ll take about five minutes, maybe less, until tender. You want them slightly floppy but gently al dente. Meanwhile lightly fry the onions and garlic in oil in a flat-bottomed pan until softened then stir in the cannellini, drained and rinsed from the tin, and the herbs. Pour in the stock and let everything bubble and stew away on a low heat for about three to five minutes. Add the tomatoes and paprika, stir in well and let cook for another minute or so. Finally jumble in the runners and season, making sure everything is amalgamated. Remove the bay leaves. I let this sit for ten minutes or so before serving and you could even chill it in the fridge or eat it while hot. Some bread might be a good idea to, as the Italians say, fare la scarpetta. Basically to mop things up.

Allow me a whimsical digression. The above Italianism, and its translation, I think hold perhaps the key to the origin of a literary character’s name: Patricia Cornwell’s Kay Scarpetta , protagonist of a series of crime novels. Fare la scarpetta, as already suggested, translates at least in culinary terms to a mopping up, bread used to wipe around the pan or plate containing the meal just eaten as a way of soaking up the delectable juices and flavours left behind. Furthermore the word che in Italian is often used in exclamations, such as che palle! (what a drag!) or che casino! (what a mess!). The forename Kay and che are homophones. So that, and this is just a theory, the name given by Patricia Cornwell to her US-born sleuth could translate as: What a Clean-Up! Suitable name for a crime-solver, methinks…case closed?

For the remaining runners the next day I made a simple ratatouille. The prepared beans went into a lidded saucepan with half an aubergine, chunkily chopped, a tomato similarly dissected, half a quartered onion, dash of tomato puree, bay leaves, garlic clove sliced, good scattering of dried oregano, generous glug of olive oil, salt and pepper. Lid on, low heat and everythig just left to cook gently for about forty minutes. Bread was the only other thing needed. And that cleans this one up.