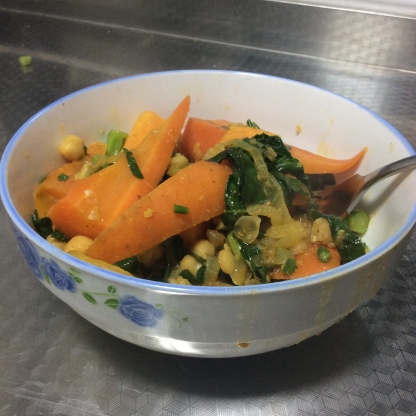 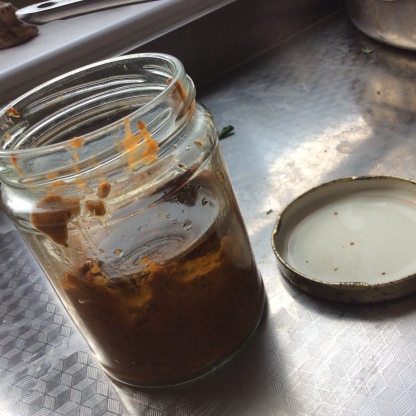 Some recipes for harissa call for peppers, others do not. I used one for mine simply because I had one. Other ingredients were:

First I got the skin off the pepper by blackening it on the hob flame then flaking off the burnt bits and getting rid of the seeds and pith so that only the flesh remained. I dry-roasted the seeds over a short flame before pounding them up in a pestle and mortar. To a container I added the chillies, garlic and coriander, all chopped, as well as a good dollop of tomato puree, the pepper, seasoning and seed powder, before glugging in some olive oil. Then it was a simple matter of whizzing it all up with a stick blender until smooth, I had an empty and sterilised jam jar ready and after I had spooned in the harissa I topped it up with olive oil. This should be done after each use to exclude the air and will ensure the paste lasts at least a month in the fridge.

In many dishes meat is just a texture that can easily be replaced. Here I used carrot and sweet potato, keeping the slices large. Here’s the list:

Slice the onion and garlic and gently fry in olive oil until soft. Meanwhile chop the carrots and sweet potato on the diagonal so that you end up with thick wedges. Add the turmeric to the onions and let it amalgamate for ten seconds. Do the same with the smoked paprika. Pour in a tablespoonful of honey. Then stir in a generous spoonful of the harissa and stand back to appreciate the wonderful spiced aroma in the kitchen. Next add the carrots and sweet potato, making sure they are caked in the sauce, then pour in enough water to half cover everything. Cook with a lid on a gentle heat for about 15 minutes. Add the chick peas, a pinch of salt and a little more water if necessary, put the lid back on and cook for a further 10 minutes or so. Chop up the rinsed greens and stir into the stew. When they have softened put in the herbs, turn off the heat and let it sit for a minute. The result should be colourful and inviting.

Bread can be used to soak up the delicious liquor and a squeeze of lemon will lift the whole dish. Keep the harissa handy in case you want an extra heat hit.